The original picture switch has a baby picture, which can be used, or can be your template in making your own picture switch. Of course I'm into personalized stuff, so I really took the time to carefully place my kids' picture in it... I had a hard time doing it actually... But, I am happy with the outcome... 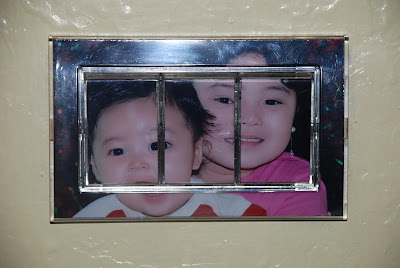 It is our family tradition to hold a Christmas party for all our employees and the people in our household... We do it usually on the 21st or the 22nd of December. After the party, many of them are spending Christmas with their families and having their annual vacation since our small family business don't have regular operations during the Christmas season...
That Christmas party serves as the company's biggest party. All staff and employees are served and treated as Kings and Queens... We believe that it is one way of paying them for their hard work during the year... As owners, we organize the party, create games, decorate the venue, host the party, provide entertainment, etc, etc... 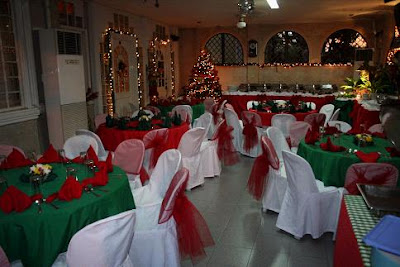 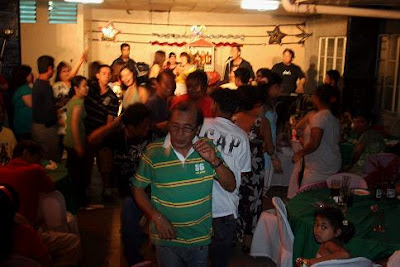 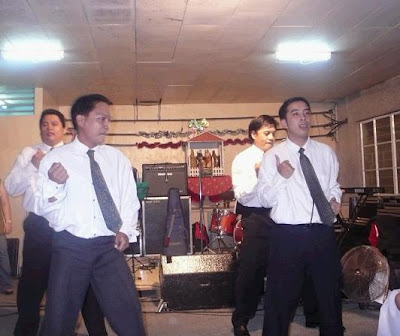 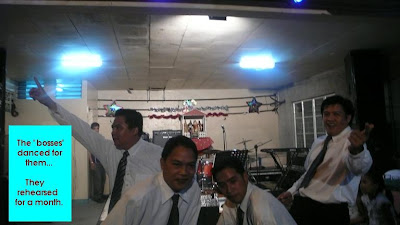 That is why we get so tired and exhausted, that after the party, we can't even have a "traditional Filipino Noche Buena" - or a Christmas Eve Dinner...

I asked some of my friends and relatives what do they usually eat, how do they spend their Christmas Eve... And many of them have the same answers... Sleep until 12 midnight, then, eat ham and cheese, then, open gifts, then, sleep again.... That's it??? Well I guess the sleeping thing takes the momentum away, makes them feel drowsy and feel like shouting - let's get it over with and go back to sleep!

One friend I know loves to cook, and she does serve lots and lots of entrees during Christmas Eve... Her neighbors usually visits her and eats with them every night...

For us, since we don't have visitors, and we just had our ultimate Christmas Party, our Christmas Eve turns out to be really boring... Yearly... We can't even wait until 12 midnight to open our gifts...

But this time, it was quite unusual... We had fun... We stayed up until 2am... Why??? Because we had Ham, Cheese, Bread, Grapes, Hot cocoa, Wine, Games (Electronic Guesstures), and the best thing we did - Pictorial!!!

Look how crazy we were...

Just the four of us... Peegee, Marnie, Paolo, and I 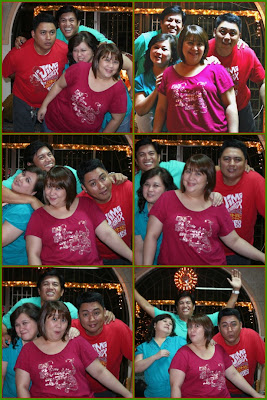 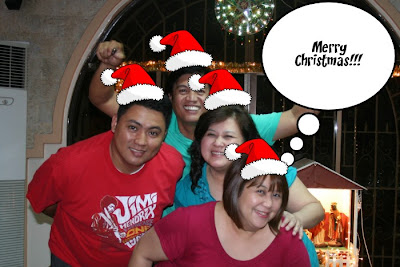 It really is fun just being playful and pretend like a child...

Oh, The Wonders of Blogging

I can't believe I got 4 out of 10 from my Christmas Wishlist...
From my Mom - My Skin Guru

From my sister Marnie - a wall mounted blower

From Paolo - My Dear Husband

And from Peegee - My Brother In Law

Although the last one's not really on the wishlist because I asked for Shu Uemura, I guess MAC is ok... It'll do its job the way Shu does...

I love Window Shopping... I remember when I was a kid, one reason why I enjoy Christmas is looking at window displays in malls... Many of you guys don't live here in Manila so you are not familiar with the so-called COD... It was a mall during the 70's (I have no idea if it still exists) and they were the first ones to construct Christmas Themed moving dolls and statues at the mall facade, and all Filipinos gathered together to watch the scene... It was really crowded, and my dad had to carry me up his shoulders just to get a glimpse. Of course during those days, we all found it techy, unique, and very beautiful... Now, that COD theme has transferred to another location (Greenhills Shopping Center) and has attracted thousands of Filipinos too...
Here are some Christmas Window Displays from different malls all over the world...
Courtesy of Forbes.
Selfridges - London 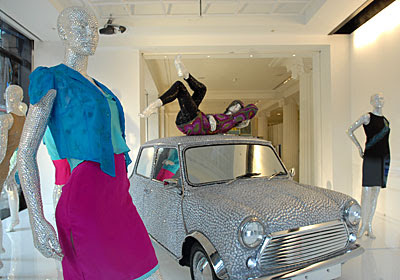 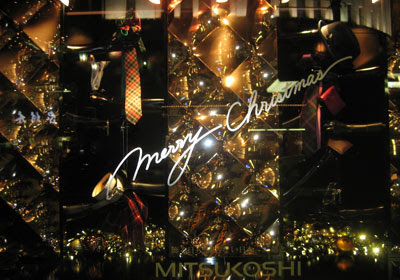 Although Christmas Day is not an observed holiday in Japan, retail stores tend to take full advantage of the season, playing Christmas carols in English and decking the aisles with garland, lights and other festive accoutrements. Major department store Mitsukoshi draws in the masses with a billboard that features a huge Christmas tree made entirely of lights. Here, in one of its many windows, the retailer displays festive plaid ties with a mirrored background and hundreds of gold bulbs strewn around.
Macy's - Chicago, USA 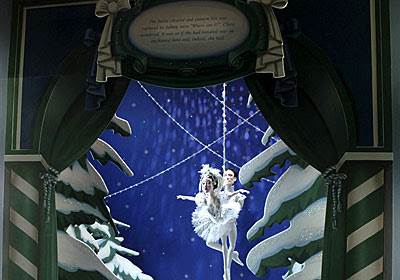 Formerly the location of the beloved Marshall Fields department store, this Macy's flagship does as much to its windows as its New York City location. This year, the retailer chose "The Nutcracker" as its theme, with each window depicting a different scene, from the dance of the sugar plum fairies to Mother Ginger and her polichinelles.
Harvey Nichols - London 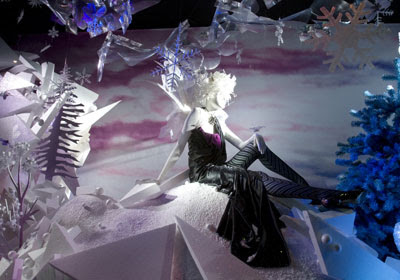 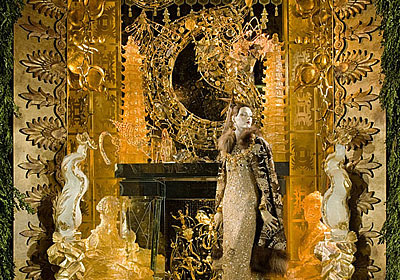 This year, senior director of window merchandising David Hoey created windows based on the five elements: earth, air, fire, water and light. "Earth" is filled with plants, animals, insects and flowers, along with dozens of paper-mache animal figurines. "Air" depicts a whimsical garden and a giant flying elephant. "Fire" features a fire-breathing dragon, while "Light" (pictured) places the sun, moon and stars front and center with lots of gold and glitter.
Barneys New York - USA 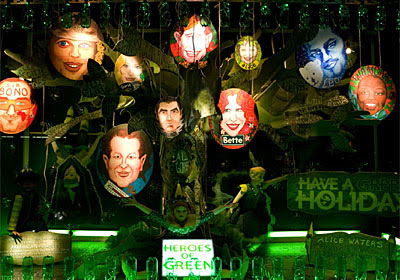 Visit the retailer's Madison Avenue location this month and you'll be told to "Have a Green Holiday." The Simon Doonan-conceived windows feature a Rudolph the Recycling Reindeer (with a green nose), elves sitting under "certified organic" mushrooms and a tree decorated with Christmas bulbs depicting "heroes of green," including Al Gore, George Clooney and Bono. Although they don't feature actual products in the windows, Doonan believes that the displays are the company's most effective marketing effort during the holidays.
Galleries La Fayette - Paris 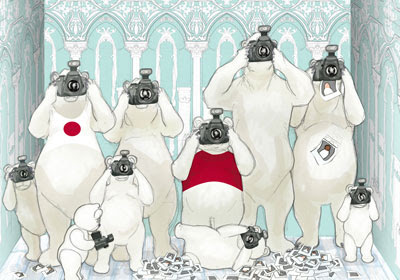 Holiday lights coat the exterior of this Parisian department store, but its windows are more subdued. Instead of using mannequins, the retailer's creative team designed story board-like backgrounds for each window, framing them with streamers. Each features sketches of purple- and blue-toned snow scenes with polar bears and penguins. 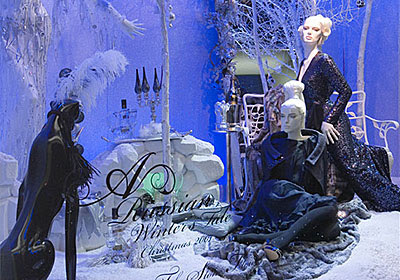 For a "Russian Winter's Tale," visual window manager Sarah Southgate was inspired by the large number of Russian tourists and immigrants that visit Harrods in search of Faberge and Baccarat. Each window is an image inspired by Czarist Russia; some depict scenes from ballets like "Swan Lake" and "Sleeping Beauty." The window shown features a replica of candelabra designed originally for Czar Nicholas II.

And lastly, my favorite...
Lord and Taylor - NY 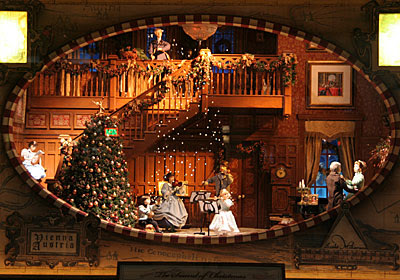 America's oldest department store features windows with no products. Created by Manoel Renha, this year's theme is "Christmas is the Moment." Each window is framed in antique maps of the world, displaying images of different Christmas scenes, including a Russian ball and a French bakery. The scene shown depicts a Viennese mansion filled with musicians playing in a room covered in garlands and bows.
Posted by McDreamer at 12/16/2007 3 comments:

Email ThisBlogThis!Share to TwitterShare to FacebookShare to Pinterest
Labels: Christmas

Merry Christmas To All!!!

I noticed that even without make-up, we can do whatever, or go wherever, as long as our hair looks nice, healthy, groomed, and moisturized... I really look terrible if I don't style my hair... I don't blow dry my hair everyday because I believe that too much heat can cause hair breakage... But these past few days, I've been in and out of the office, and attending Christmas parties held by clients, suppliers, friends, and families... I had no choice but to style my hair everyday - that means, having to use hair dryer and ceramic flat iron on my crowning glory every single day...

I did some research, and here's what I found out:

Hair Do’s
1. Invest in the correct hair care products designed for your specific hair type. For dry, damaged or chemically treated hair, look for products that contain moisturizing ingredients and are formulated to repair damage. If you have oily hair, use a product designed for deep cleansing.

2. Use a wide-toothed comb on wet hair. Combing or brushing your hair with anything else can cause your hair to break off. You should only use a brush when your hair is dry. - I DO THIS, REALLY...

3. Consider your options when choosing a new hairstyle. Is your hair thin or thick? Is it wavy or straight? When choosing a hairstyle, make sure that you consider hair’s texture. If you
have fine hair, all long locks are going to do is make your hair look limp. - I DON'T CARE, I USE HAIR PRODUCTS TO MAKE MY HAIR SUIT THE STYLE - bad, bad, bad...

5. Get to know your hairstylist. He or she can help you with any hair concerns you might have. If your stylist is not willing to answer your questions, maybe it’s time to seek a new hairstylist.

Hair Don’ts
1. Don’t allow a hairstylist or anyone else talk you into the latest style. If you’re not fond of the latest cut, say no. If you don’t learn to say no, you’re going to be stuck with a style you hate. It’s your hair and your money, not theirs!

2. Don’t purchase a cheap at-home hair-coloring product. You might think it’s a great value, but that great value will more than likely be a disaster in the end. Instead, choose a coloring product with moisturizer that is known and trusted. Better yet, leave the hair coloring to a professional! - GUILTY!!!

3. Don’t get more than one chemical treatment in the same week. Over processing your hair can lead to unhealthy hair. Choose either a perm or hair coloring, not both.

4. Don’t cut your own hair. Cutting your own hair can result in an uneven mess if you have no idea what you are doing or can’t see a certain area to cut. Make an appointment with your local hairstylist and have them cut your hair. Often they will trim your bangs for free if that is all that is needed. - GUILTY!!!

5. Avoid overloading your hair with product. Too much product will leave your hair sticky and unmanageable. Instead, find styles that don’t require much product and leave the styling sprays for special occasions.

5. Don’t use your heating tools on a daily basis. Overuse of heating appliances can fry hair. Try drying hair naturally and skip the curling iron once in a while. - GUILTY!!!

6. Avoid using clarifying hair care products more than once a week. These products can trip your hair of moistures, leaving your hair dry and brittle. Instead alternate clarifying products every other week and add a moisturizing shampoo and conditioner to your hair care routine. - GUILTY!!!

Now, I'll try my best to follow the guidelines... I have falling hair, brittle hair, and actually looks damaged and dry... I really have to do something about it... Awww...


I know that many of these items are expensive... But these are the things that I'd buy after the Christmas rush... Or should I say, after receiving my Christmas bonus, if there any... 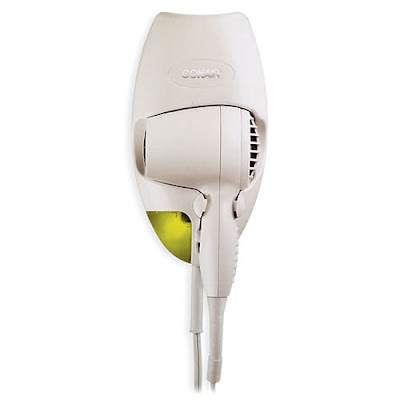 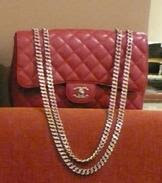 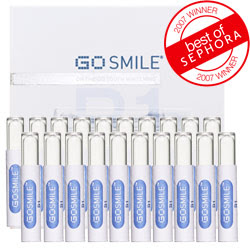 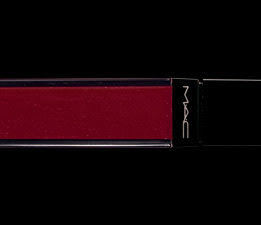 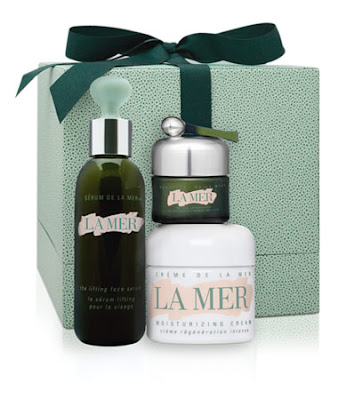 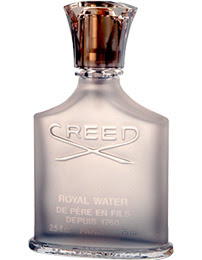 A dear reader, gave me this. Roots is based in Canada and is credited for its commitment to environmental awareness. 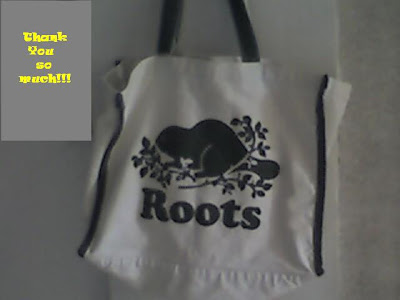 Thank you so much for your generosity... I'll always carry this bag whenever I go shopping.
Posted by McDreamer at 12/05/2007 No comments:

I don't know if you guys pass by J.P. Rizal Street in Makati, near Rockwell...
Last year, I already noticed this particular house. It was very well lit, fully decorated...
But now, the decors got even bigger! Take a look... 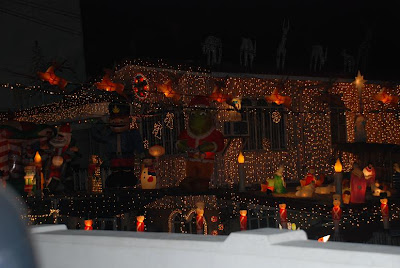 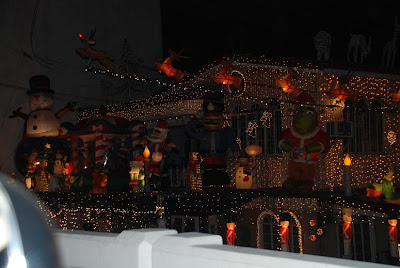 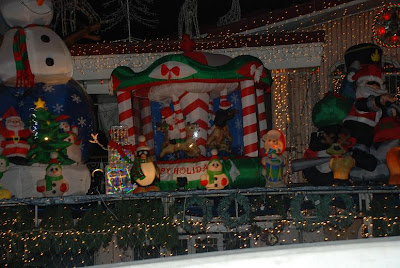