Christmas Is All About Giving

Christmas is all about giving, not receiving... That's what the priest told us this morning... I'm feeling a little sentimental about Christmas... Cheesy, but it's the fact... I always thought that the more I give, the more relieved and happy I feel... So I want everybody to feel the same way... Just one simple advice... In case you don't receive anything from a person, don't fret... don't hate... don't despise.... don't question... It's not his/her obligation to give you anything... Eventhough you gave her something, you shouldn't expect anything from her in return... We have to understand, not all people can give, and if you are one of the lucky ones who can, don't expect a gift from everyone... That's a fact, that's Christmas...

Yesterday, I asked my daughter if she wants to do something nice to poor children. She replied, why mom? What should I do to make them happy? I told her to choose some of her toys/clothes/shoes that she doesn't need/want anymore, and give them to poor children... At first, she felt a little reluctant and selfish... She said that she want to keep all her toys... But when I told her that if she could make a lot of poor children happy this Christmas, Santa would be soooo proud of her that maybe he could give her something she's been longing for...

By that, she became excited to choose from her toys, and surprisingly, she gave more than half of them...

Here in Manila, Executive Villages and Private Subdivisions are surrounded by underprivileged families... That is why, the first thing that came out of my mind is to give toys to the people that I see almost everyday, people that see my car passing in front of them every single day...

I posted a small notice on our front gate and expected a small group of children lining up... 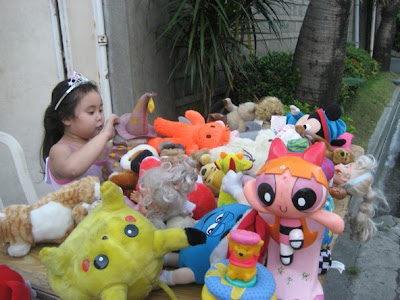 That's my daughter taking one last look at her stuff... 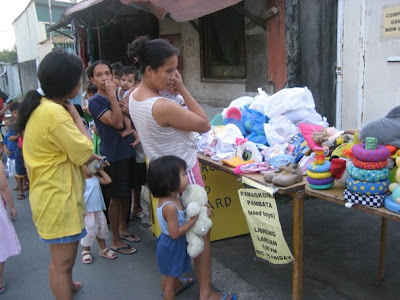 We all felt good after that event... I want to instill in my daughter's mind that she could be a Good Samaritan in her own little way...

That night, I was approached by a couple who thanked me wholeheartedly... They said that this is the first time they experienced this kind of generosity and that we made their children very, very happy...

That comment from the couple was the best Christmas present I ever had...
Posted by McDreamer at 12/17/2006 4 comments:

Recently, one of my dearest cousins, CWT, told me about Moleskine... We were talking about papers, stationeries, notebooks, diaries, and journals... I've always thought that this girl really loves taking notes, passing around thoughts written on small cute paper... Honestly, i'm a little bit shallow, but I appreciate simple things like that... Whenever she has small messages for me, it's all handwritten in a cute notepad, and the handwriting is simply neat and beautiful... Eventhough the message simply says, "Thanks, call you later!!!" Well, that's how shallow I am, peeps, for your info... muwahahahahha.... Anyways, when she told me that her latest collection is the Moleskine, I looked it over the net... And I realized how beautiful and useful they are...

"Moleskine is the legendary notebook, used by European artists and thinkers for the past two centuries, from Van Gogh to Picasso, from Ernest Hemingway to Bruce Chatwin."

It comes in different forms, The Classic, The Reporter, The Cashier, and The Diary.

I admit, I do keep a journal, a cute spring notebook with beautiful graphics on the front page and some scripts on the inside, but after reading all about the Moleskine, I realized that keeping a journal does not only rely on the kind of notebook you are writing on, or how expensive the pen you are using... Keeping a journal brings out the artist in each one of us, making us express our feelings in beautiful writing...
Posted by McDreamer at 12/17/2006 4 comments: 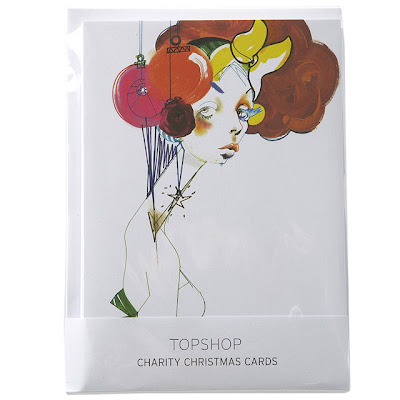 Every fashionista needs a chic set of Christmas cards to impress their friends, and Topshop has a fabulous solution. Artist Julie Verhoeven has designed a range of cards for Topshop featuring her distinctive illustrations. A pack of eight cards costs £4 and all profits go to PETA, Terrence Higgins Trust, Women's Aid, Refuge and Fashion Targets Breast Cancer. Get them in store or online at www.topshop.com
Posted by McDreamer at 12/06/2006 9 comments:

Carrie and The Girls Are Back!!! 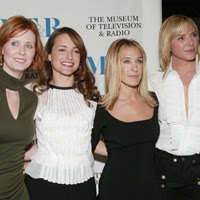 I don't want to get your hopes up, but it looks like negotiations to make the film version of Sex And The City are back on track. The four leading ladies – Sarah Jessica Parker , Kristin Davis, Kim Cattrall and Cynthia Nixon have all resumed talks with the studio that wants to take the cult TV show onto the big screen. After the series ended in 2004 rumours circulated that the film was a no-go because Kim Cattrall refused to be involved, but a studio source now says "substantial negotiations have opened with each of the stars' teams this week… Obviously, there is still a lot to be worked out contractually, but it would be amazing to get this project off the ground. There is no doubt that fans cannot wait to see them all reunited." Here's hoping Carrie and the girls will soon be putting their Manolos back on and hitting the sidewalk for more adventures.