When I go out with these group of friends,
I always learn a lot about fashion...
But not only about clothes and make up...
They talk about "on how to be a real woman"...
From root hair colors, IPL's, brow shapes, massage therapists, spas, waxing salons, just to name a few... In short, they are what I call "hardcore women"
of the century... 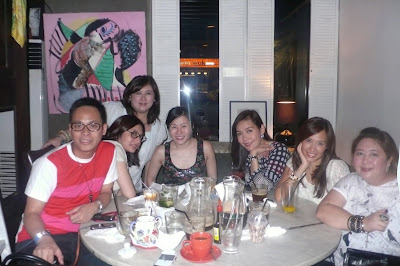 The Purse Ladies...
Last night, three of them were donning the same bracelets.  The CDC Collier de Chien by Hermes. 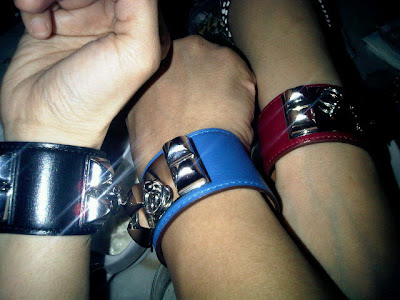 Lovely!  Unfortunately, I don't think one could fit my swollen wrists...  But good thing Rachel Zoe blogged about the new Hermes Lacquer Bangles! 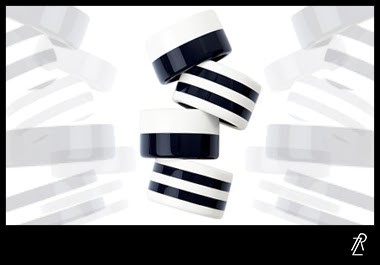 Easter is more than just Eggs and Bunnies.... 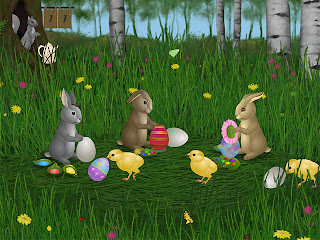 It's a celebration of our faith...
In the Easter Mass, we were baptized again,
blessed again...
As if we are renewing our Baptismal vows
with Jesus Christ, as we say the Apostle's Creed,
we welcome Him to be our guide to be the "new" us.
It is of God's plan to let his only begotten Son
to suffer for us, so that we may be able to remember this, over and over again, repent, and renew.
However, sometimes, we only think
of the long weekend during this season.
We somehow forget the true meaning
of this "Holy Week"... 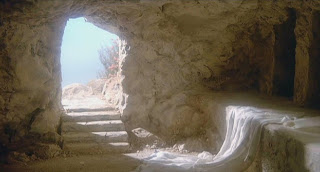 I believe It is my time to reflect, study myself,
and change for the better...
As the priest bless me and sprinkles me
with Holy Water,
let this be the start of my
"new" life
and change my
"old wretched ways"...
Posted by McDreamer at 4/26/2011 No comments:

I feel so blessed...  I kept on thanking Jesus for giving me the opportunity to do Visita Iglesia this Lenten Season, because I believe I may not be able to do this in the future...
1  Our first stop was San Pascual Baylon, or popularly known as the Obando Church. 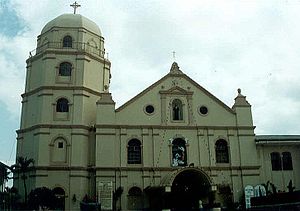 San Pascual, Saint Claire, and Our Lady of Salambao are the three focal points of this church.  For the men who wants to have a wife, they dance and pray to San Pascual, for Ladies who wants to have a husband, they dance and pray to Saint Claire, and for couples who are asking for children, they pray to Virgen de Salambao...  We were also fortunate to see some men in Penitence, who were re-enacting the sufferings of Jesus Christ.
2  Our second stop is the Parish Church of Our Lady of St. Carmel, or popularly known as the Barasoain Church in Malolos, Bulacan. 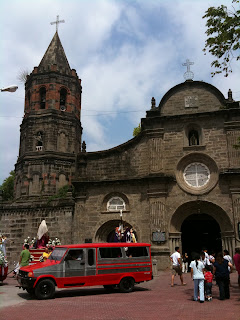 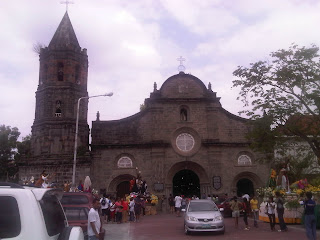 The church was the scene of the proclamation of Independence and where Pres. Joseph Estrada took his oath.
3  Next stop is St. John The Baptist Church in Calumpit, Bulacan. 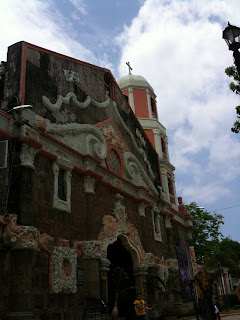 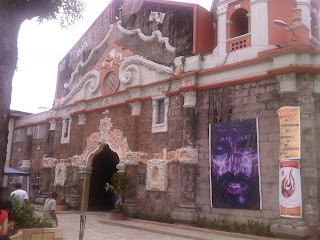 Built in 1572, this is the oldest church in Bulacan. Constructed under the supervision of Augustinian priest Fr. Diego Vivar-Ordoñez, the church had been witness to the Filipino’s struggle against Spanish, American and Japanese rule. Inside the church is a tunnel that, according to history, was used by priests during the Spanish regime to keep gold, religious statues, and ornate jewelry hidden from the sight of treasure hunters. Likewise, it is in this tunnel where revolutionaries and Spaniards were buried during the war. This was also Gen. Tanaka’s (Japanese Imperial Army) last battlefield.
4  Fourth is the National Shrine of St. Anne in Hagonoy, Bulacan. 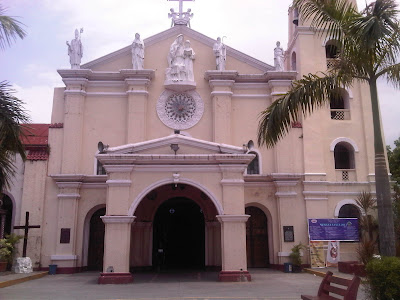 As Mama Mary's mother, St. Anne's Church looked very neat, clean, feminine, and pink to me. This is the only church that shows the relics of the parents of the Blessed Virgin Mary - St. Anne and St. Joaquim.
5  Fifth is Parokya ng San Juan, 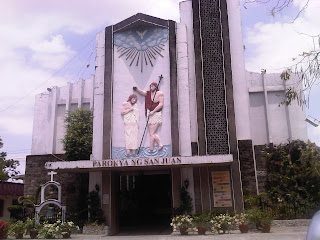 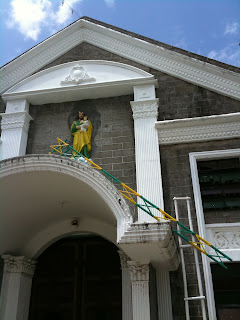 both churches in Hagonoy, Province of Bulacan.
7  And finally, our last stop, the Seventh Church is the Church of San Guillermo in Bacolor, Pampanga. 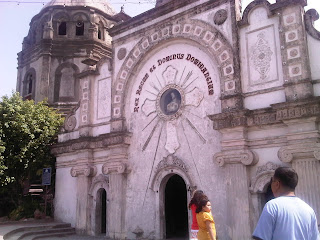 The church was originally constructed by the Agustinian Friars in 1576 - also the town's founding - with Fr. Diego De Ochoa, OSA, as the town's first parish priest.having been installed as such two years after.
In 1880, the church was destroyed by an earthquake only to be rebuilt by Fr. Eugenio Alvarez in 1886. On September 3, 1995, lahar flow from the slopes of Mt. Pinatubo which erupted into world notice on June 15, 1991, buried the church at half its 12 meter height.  But in spite of this, the Church is still being used as a place of worship, hence, inviting more people to visit the province of Pampanga.  This church was also used by ABS-CBN's religious soap opera, May Bukas Pa, which ended last February of 2010.
Somewhere along the way, we asked ourselves, where are we heading at?  Is this the right way?  Did we do the right thing?  How long are we gonna sit in the car?  Never ending doubts and what if's...
But our goal has clearly reminded us - To focus on the journey, and not the destination...  That's what we did...  And then later on, everything else was perfect...
I encourage each and everyone to do the same...
Credits:  Bulacan Tourism
Posted by McDreamer at 4/25/2011 No comments:

This is the first time I'm doing this...  The first quarter of 2011 has been very challenging and fulfilling for me, that is, financially, and emotionally...
There had been many ups and downs...
Contrary to this, I have been spiritually high
during those times...
I feel very blessed...  This Lenten season,
I've been offering prayers to my loved ones, friends, colleagues, acquaintances, everyone!
Yes, you're one of them!!!
And for my most exciting activity this Lent, I am doing the Visita Iglesia with my family...
And this is going to be our first stop.
The San Pascual de Baylon Church,
or popularly known as the Obando Church. 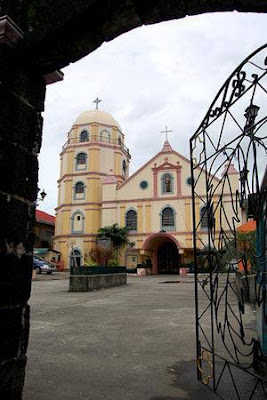 Photo Credit:  http://www.flickr.com/photos/bigberto/
And to make our journey fun and hassle free,
1) I've uploaded my iPod with R&B Soul, Pop, so my kids could relate and sing while we drive through the NLEX...
2)  I wrote down all the churches to be visited, researched every location, and highway Exits...
3) I brought a Bag of Chips, (and chocs)
with their favorites...
4)  I made sandwiches...
5)  I bought lots of drinks...
6)  I briefed each and everyone on their reading
assignments on our Way of the Cross...
7) I'm fully charged with happiness and love
for my family... 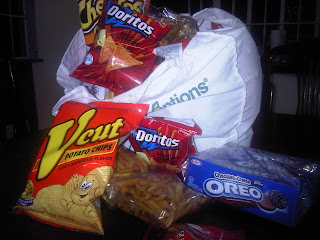 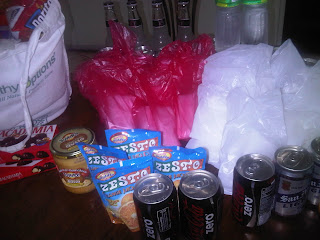 I'm a lover of bracelets...  I always feel incomplete whenever I'm not wearing any...  I even have bracelets for religion, medical, and Feng Shui purposes.  But the main reason why I always wear them - Fashion.
This is why I can't resist these new designs... These Brazil/Spain made bracelets and charms  will add an instant touch of boho-luxe to your look. 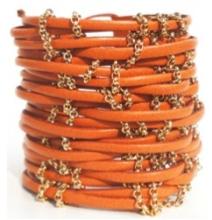 Don't you just want to have 'em all???  The greater news is, you have the option to design what you want for your  own bracelet...  You get to choose which hardware, silver or gold, what kind of material - leather or elastic, and choose from a wide selection of beautiful colors!!!  Isn't it just perfect???
Each bracelet may cost between $100 - $250.00 per piece...  Not too pricey after all!
Posted by McDreamer at 4/02/2011 No comments: